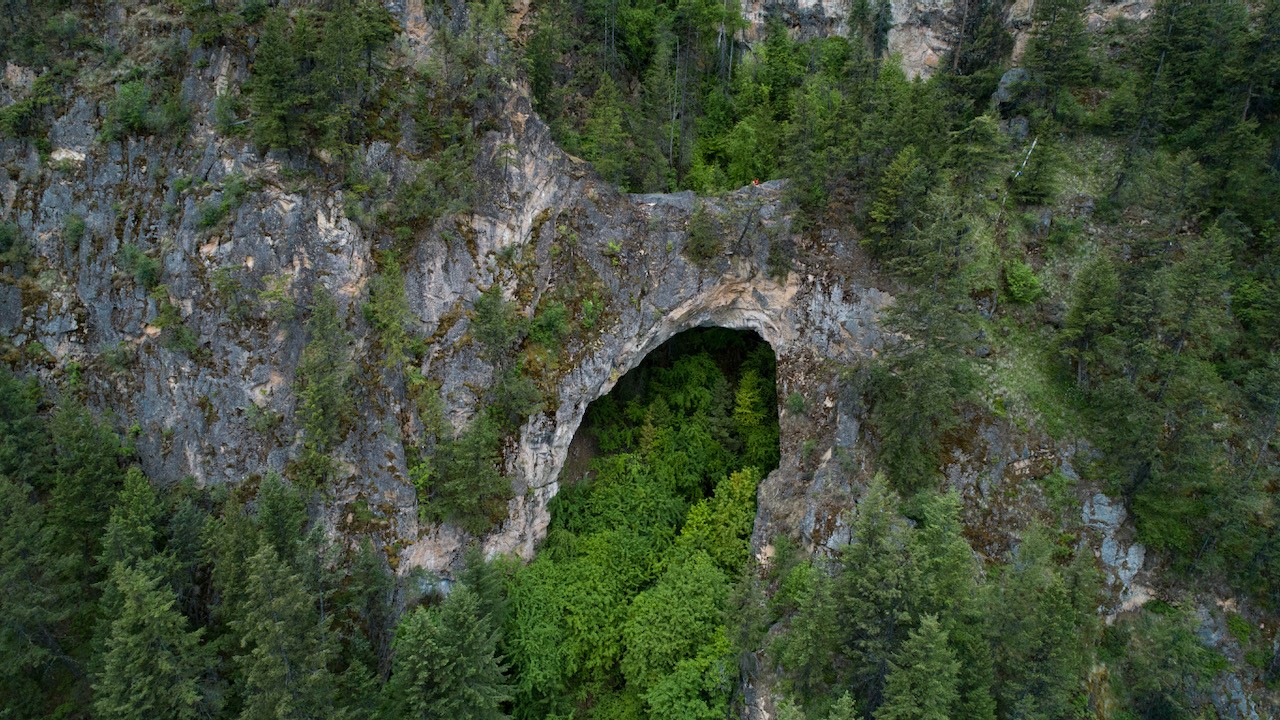 I stumbled across Renata Rock Arch last year sometime. Likely on Google Earth. The arch is actually a bridge as it was formed by erosion caused by the creek which runs under it whereas an arch is caused by 'erosion inherent in the rock'. It's apparently the largest in Canada at 44m wide, 4m thick, and 20m high.

The Arch resides on the west side of Lower Arrow Lake across from the tiny community of Deer Park. 4km north of the arch is Renata which was a community that was founded by three french prospectors in 1887 and then grew as a result of the CPR railway which is 6 miles away and now called the Trans Canada Trail. A quick google of Renata reveals a very interesting history that may intrigue you. Do it. To touch on that briefly the Columbia River Treaty was ratified in 1964 and the Arrow Dam flooded the region essentailly drowning out many of the communities on it's shores. Speaking with locals of the area we learned that three unwelcoming people now reside in Renata. An amusing story of one shooting the other in the leg over a property line dispute was shared. But I'm getting side tracked...

The Rock Arch is 341km from Kelowna with an additional 2 km to cross the beautiful Lower Arrow lake by boat. The lake is notorious for strong winds that can arise suddenly so I was trying to devise a back-up plan in case we encountrered wind that made canoe travel with lots of camera gear too risky. Jumping back to Google Earth revealed several logging roads that came close as well as the Trans Canada Trail that might make biking an option. I learned on the beach of Deer Park, the canoe take off point, that the houses in the area do have difficult road access but these properties all sport locked gates so accessing the arch by water is likely the best option.

At some point the final stretch of windy road from Castlgar turned to gravel and wound through treacherous single lane rock cuts with deliciously sexy views of a very calm lake. We arrived in Deer Park at 8:30pm on the Friday of May Long and immediately decided to take the opportunity to cross the calm waters and poach a beach at the Rock Arch trail head. We figured the adjecent, super fancy pants vacation homes consumed by immaculate grass acreages (almost certainly fertillized with left over caviar and truffles) made better bear targets than our tent and bursting cooler. We spent the warm night on the beach in the tent which was forced upon us by sand flies. The dammed lake was low and the beach was steep so we levelled a spot using flat rocks as shovells and proceeded to drink growlers of cider until we were all but silhouetted. 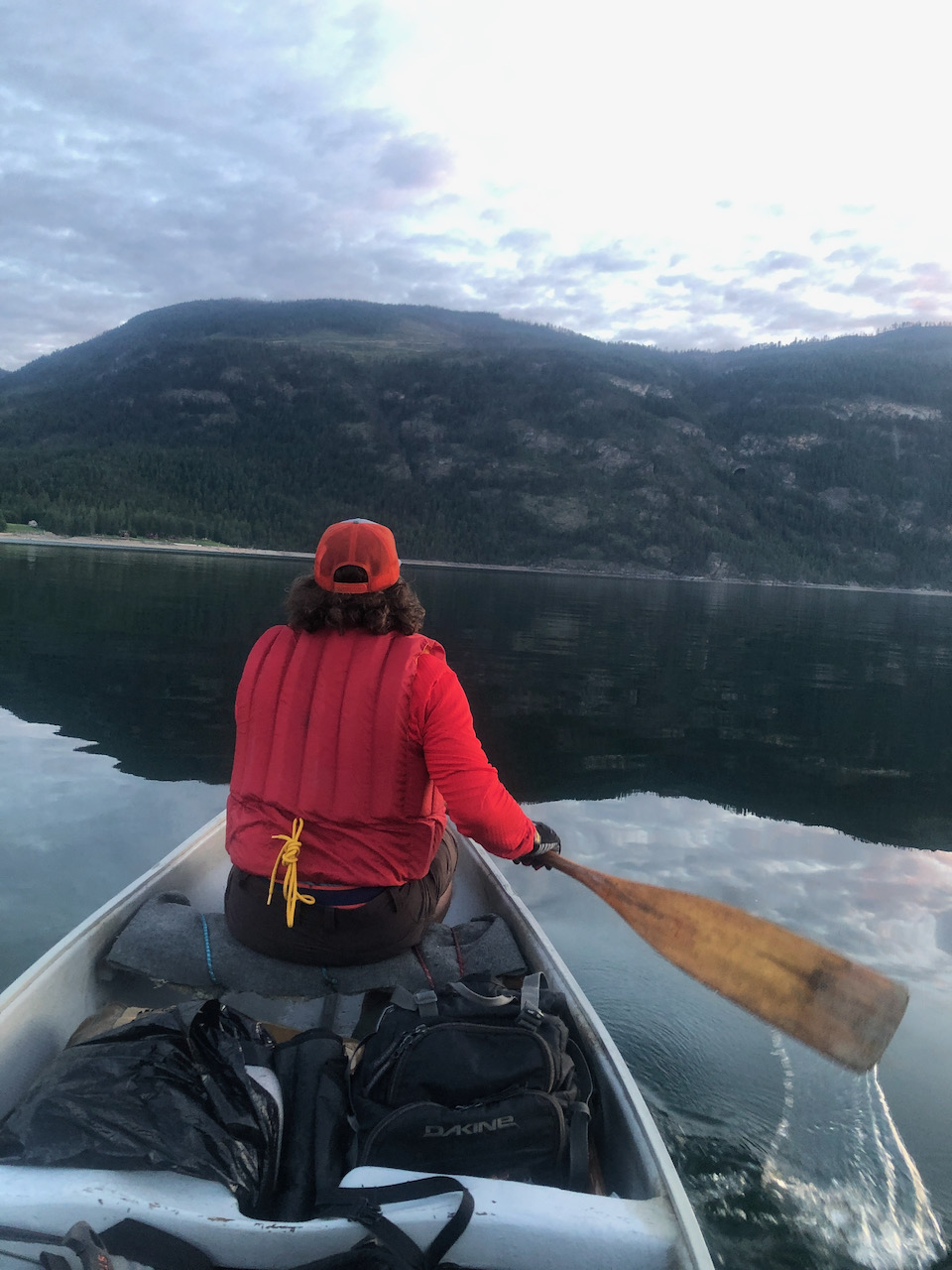 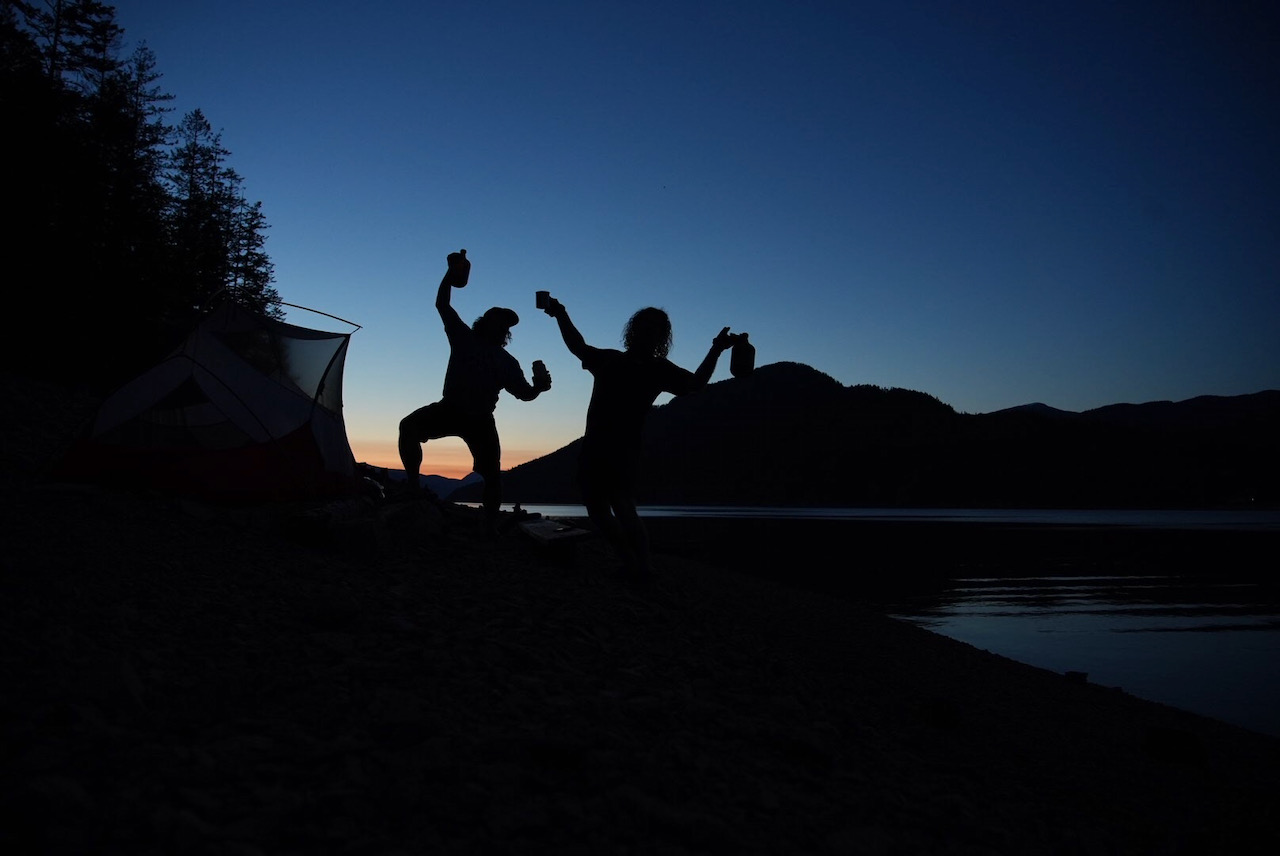 Up with the sun we began by filling our bellies with grilled cheese. Bellies fortified, we trudged the 1.6km trek to the arch. Flowers of all kinds lined the seldom travelled trail. The 266m of elevation that switched back and forth steadily climbed through steep forested terrain with splatterings of scree fields and cat scat. Steep terrain at the edge of the trail makes this hike not suitable for young kids. For the second time this spring we crossed a creek that ran underground. You can see in the associated video the amount of water travelling under the arch but it wasn't visible as we crossed the gully all though you could hear it. 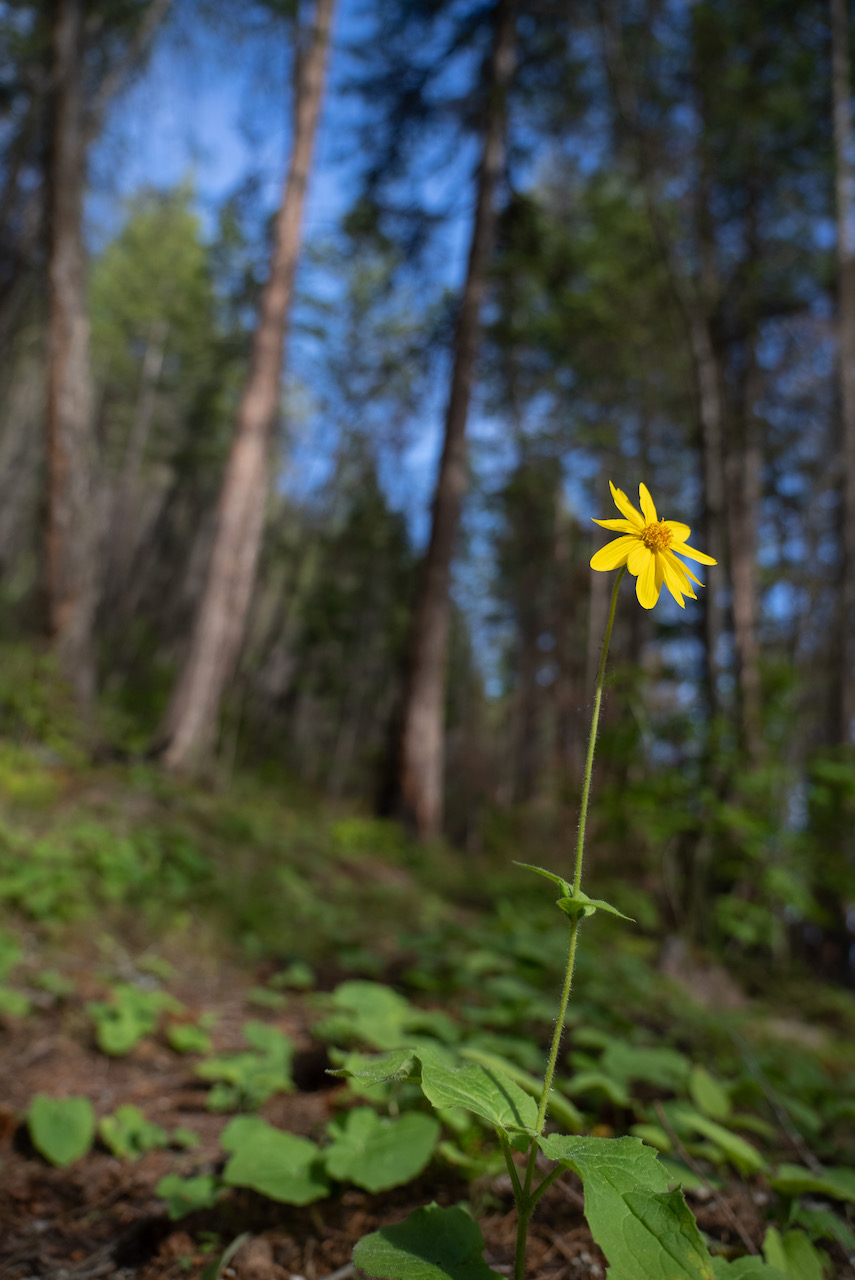 Rounding the final bend in the trail reveals the terrestrial monstrosity. I thought it looked big from across the lake but when you actually get to it it's enrormous. A scramble up through the arch leads to some ropes that make a steep pitch easily manageable to ascend to the top of the arch. Not in the least bit appropriate for those afraid of heights. Further description of this geological masterpiece is best left to the following video other than to say this is totally worth the effort to check this out. 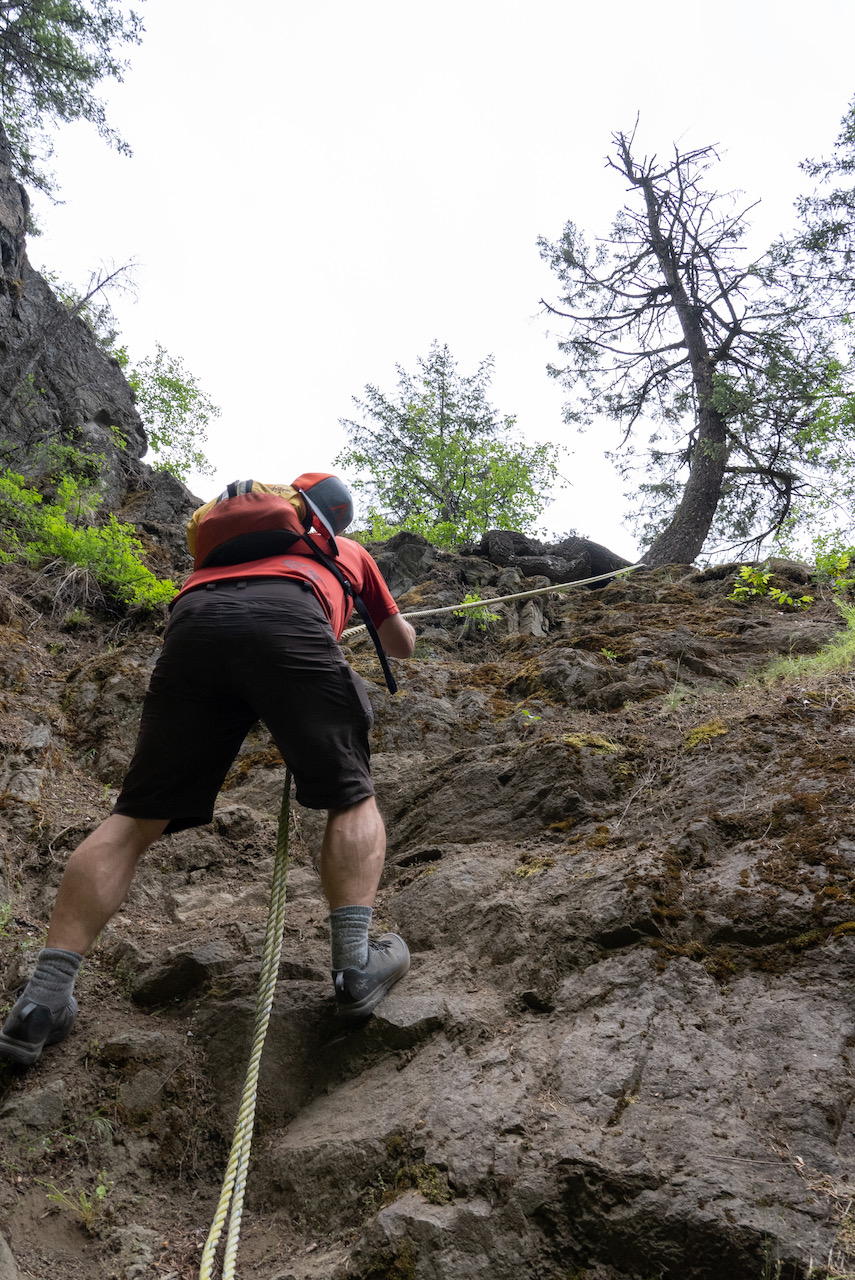 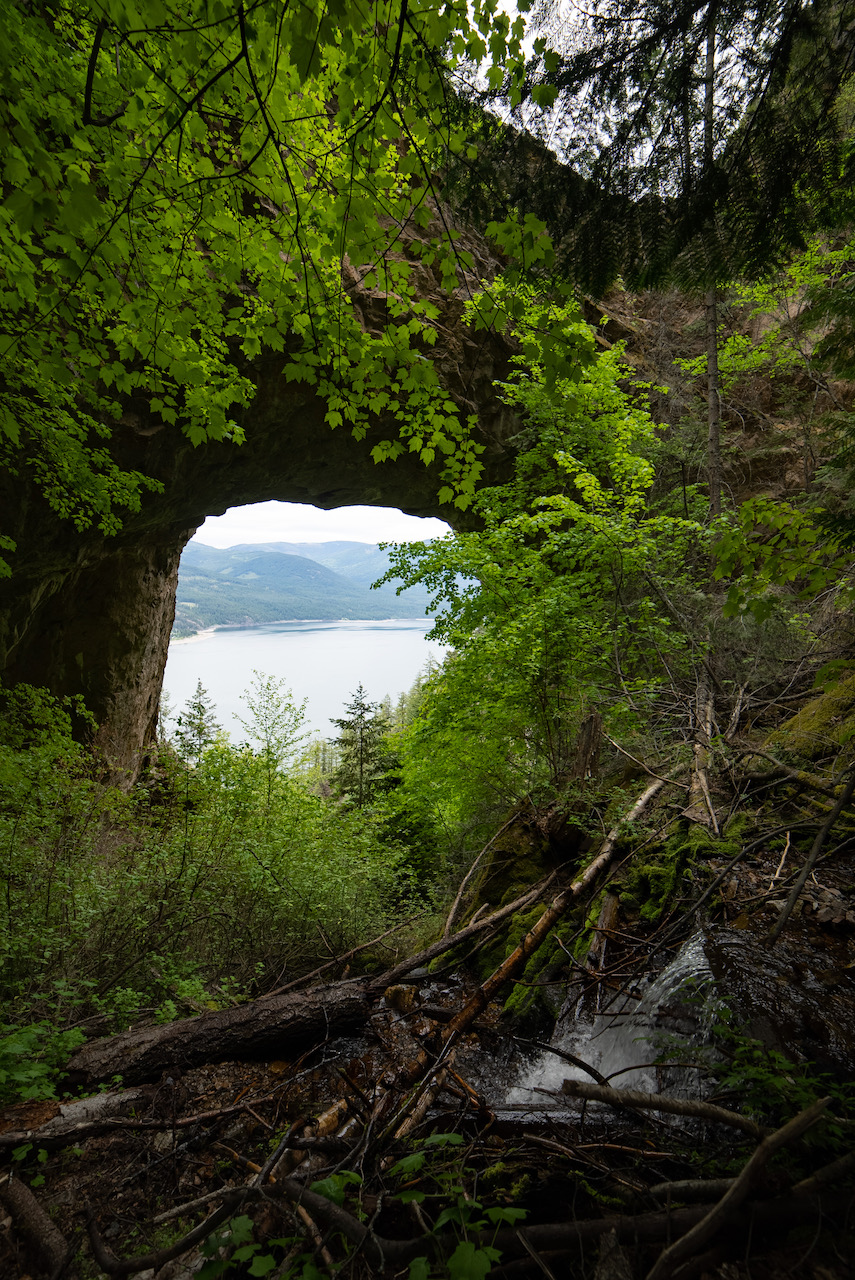 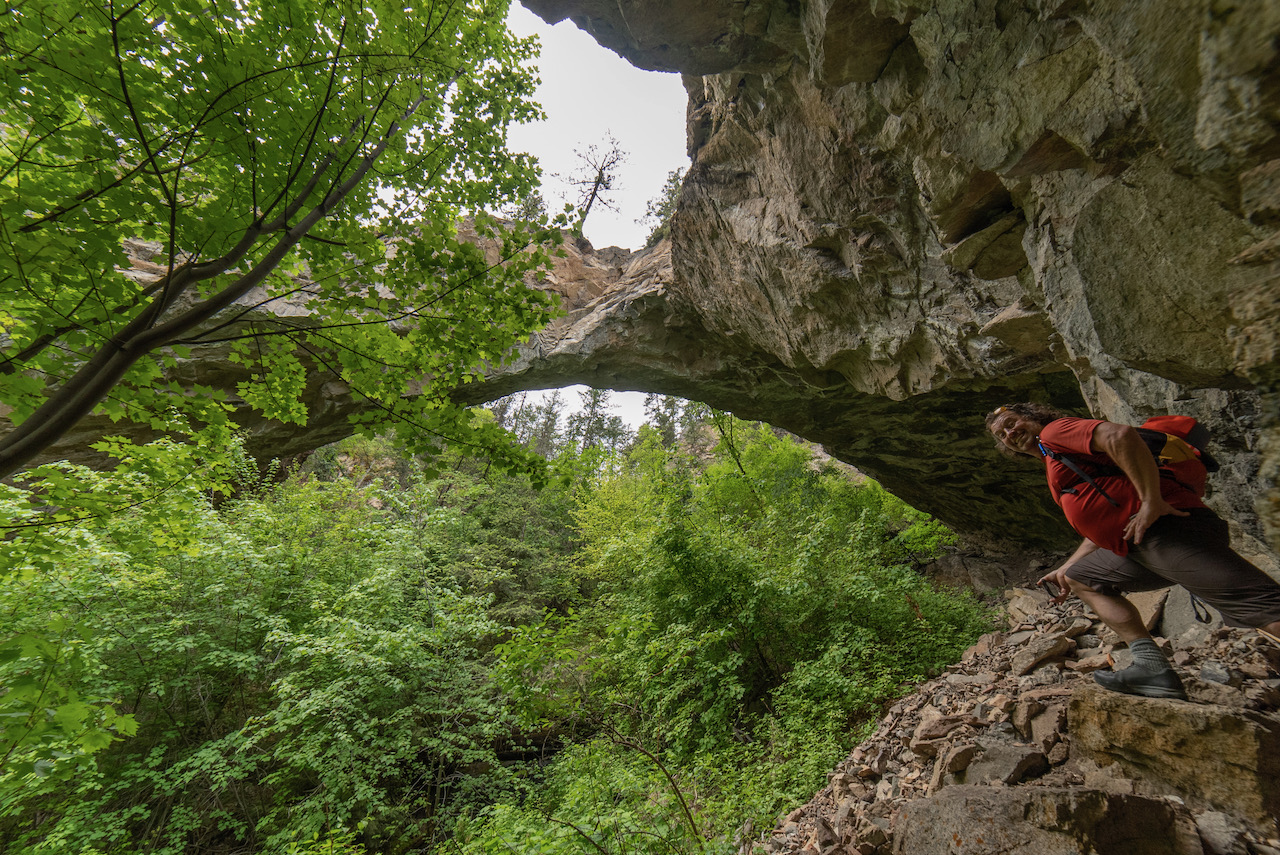 After packing our bags and loading the canoe we hit a couple of nearby waterfalls on the way back towards Castlegar. Deer Falls first which was just over 1km hike in. A two tiered falls that is stunning. The video at the end of this post has miscellaneous snippets of all this stuff if you're interested. 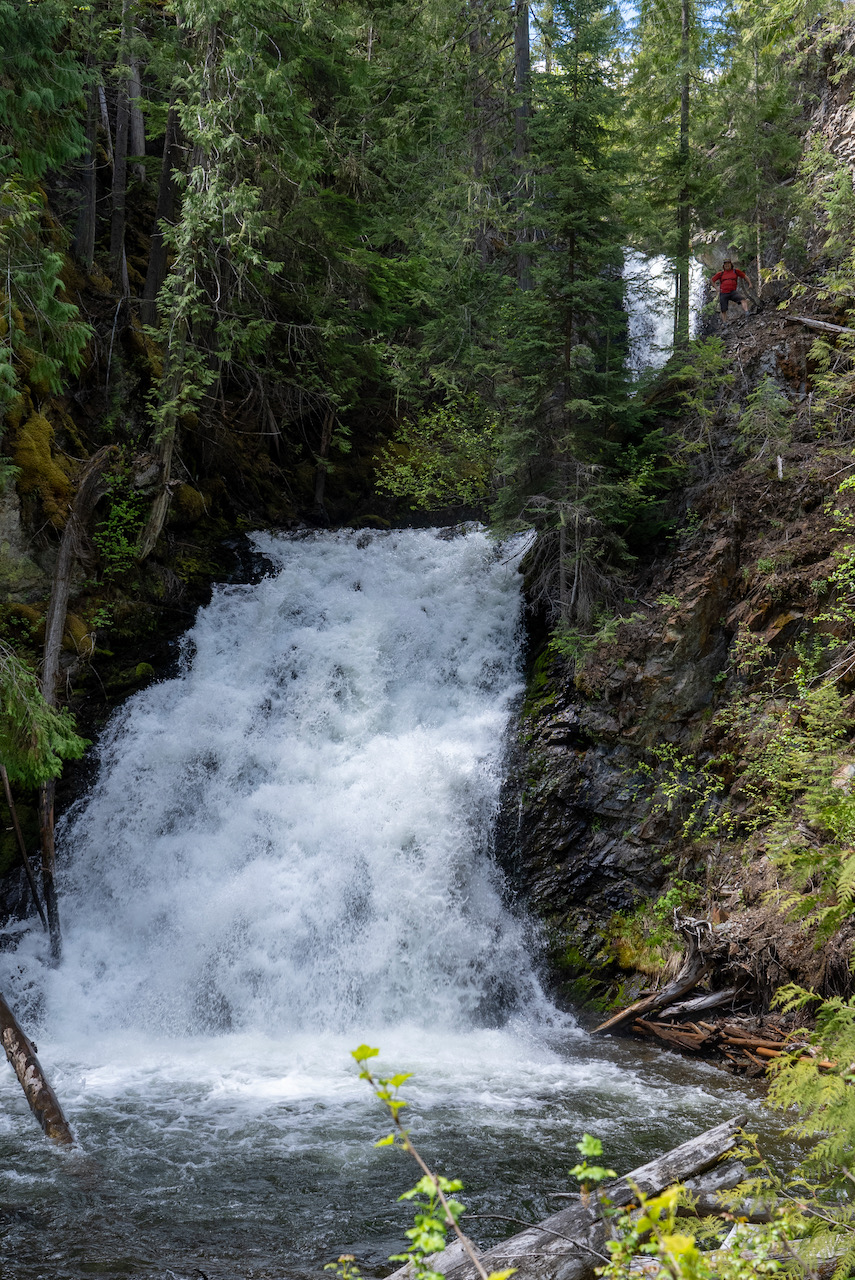 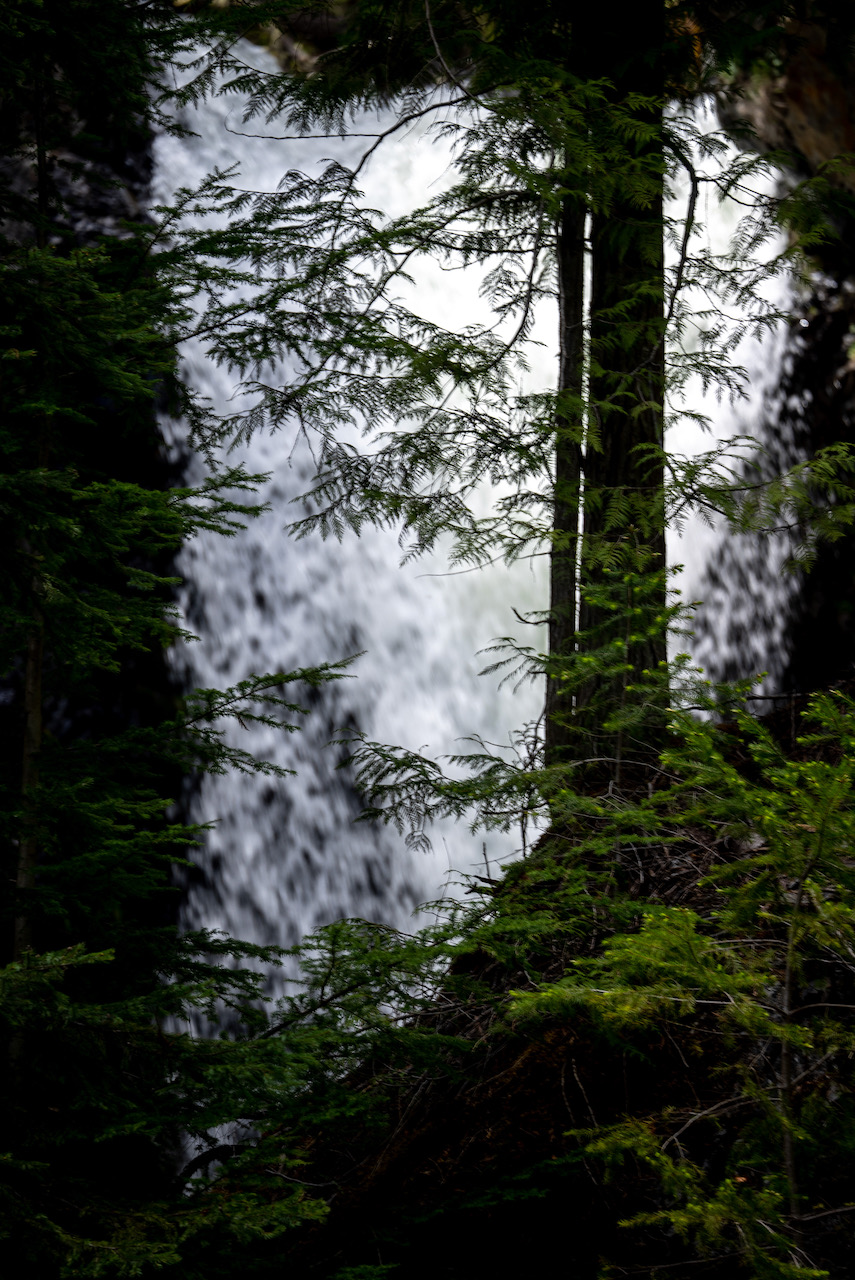 Just down the road from Deer Falls is Syringa Park which is home to Tulip Falls. A short 300m walk in. 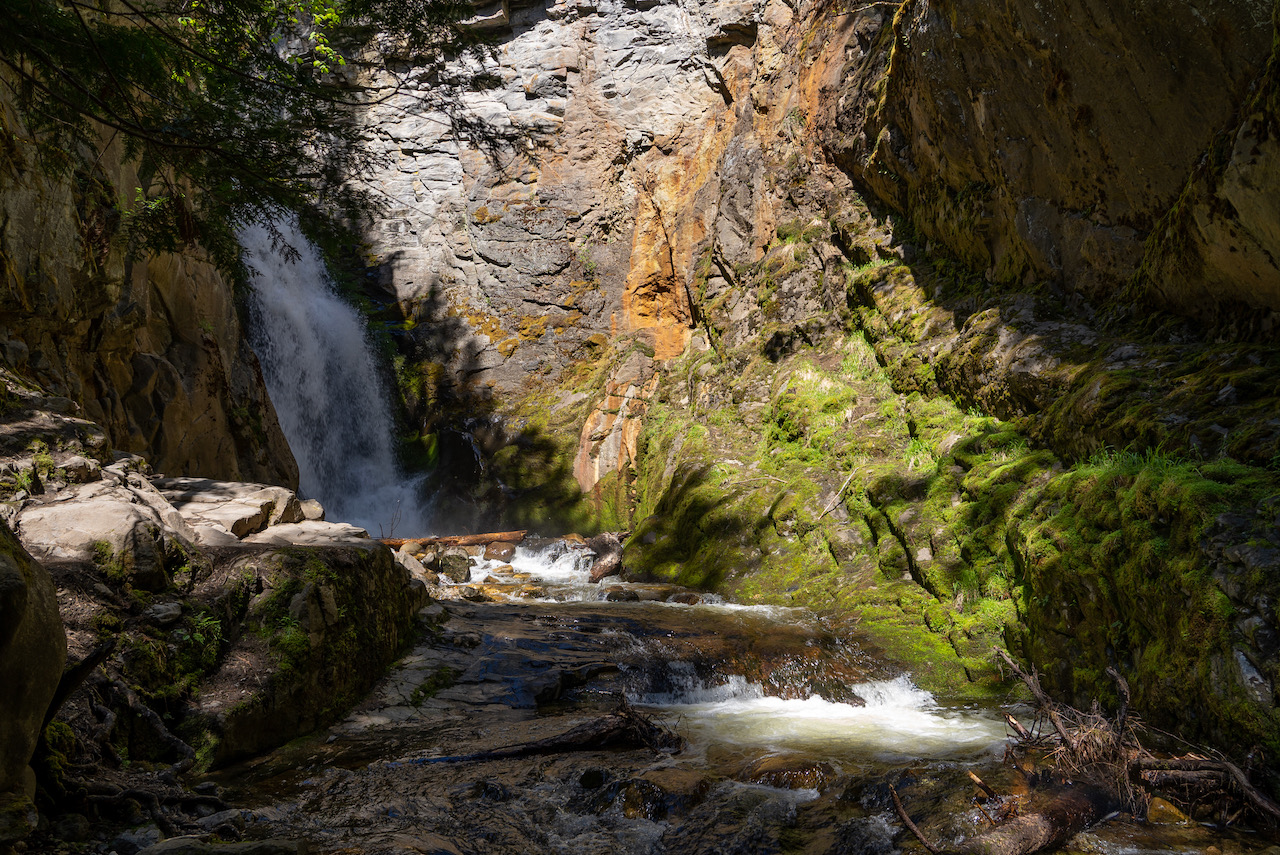 From this point we had planned to drive up the Granby River which is new territory to me. At Grand Forks we jumped onto Granby road for 40+ km before we found ourselves on the gravel Burrel FSR. Another 47km burped us out into some northern exposure that was covered in snow. Dissappointing to have to turn around after 100km. On our way back we picked up a local who acquired a flat tire on a similar mission to get to hwy 6. He was an interesting character who failed for the fourth time in the last 4 weeks to cross the pass because of snow. He informed us that we were 2km shy of the summit which would have allowed us to travel down into Edgewood and back to Kelowna via hwy 6.

After back tracking to Grand Forks we ended up at Jewel Lake Provincial Park which is perched in the mountains of Greenwood. Another spot that was on my list of places to visit. The campsite was rampant with horrifically cute bunnies that chased each other through the trails and forest. Also came across a pileated wood pecker who seemed smart enough not to peck hardwood. I have very little respect for woodpeckers but this might change that.... 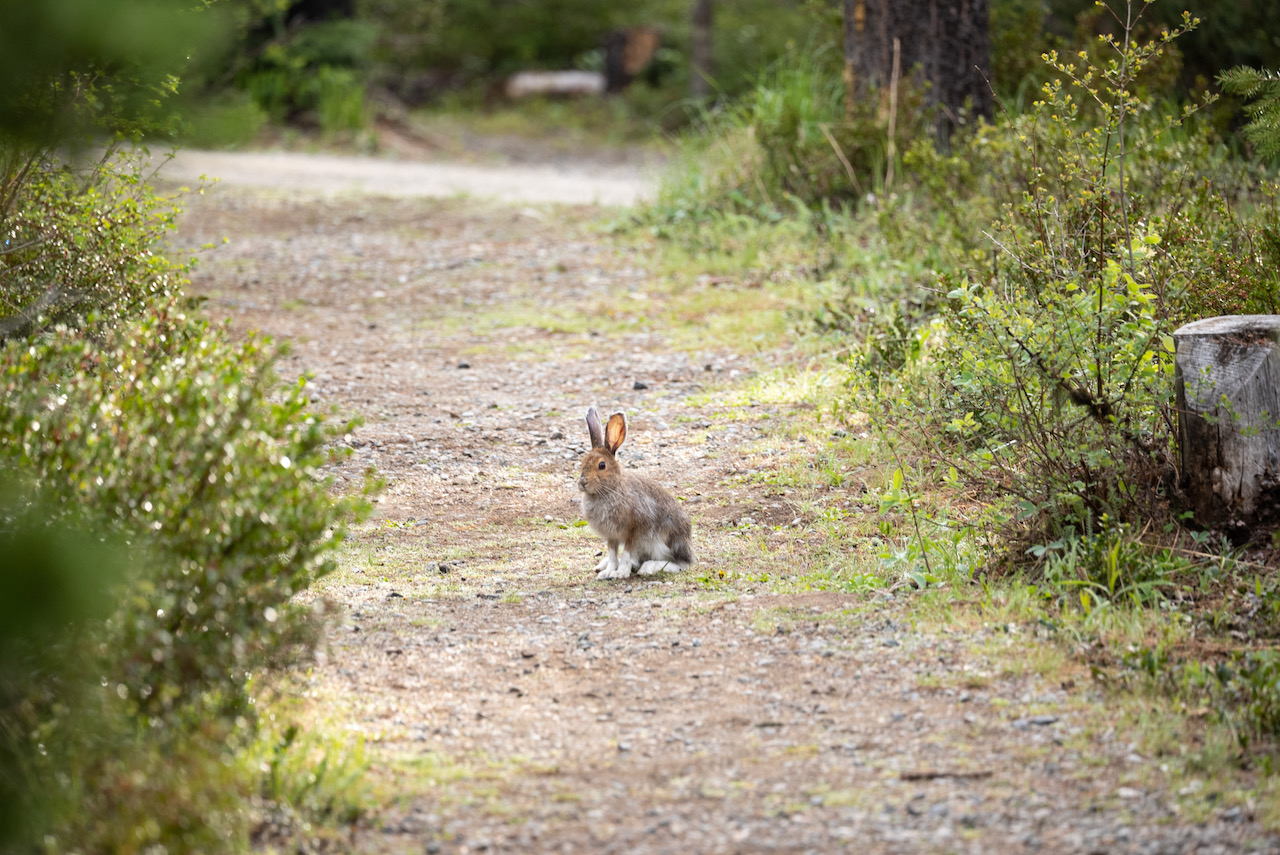 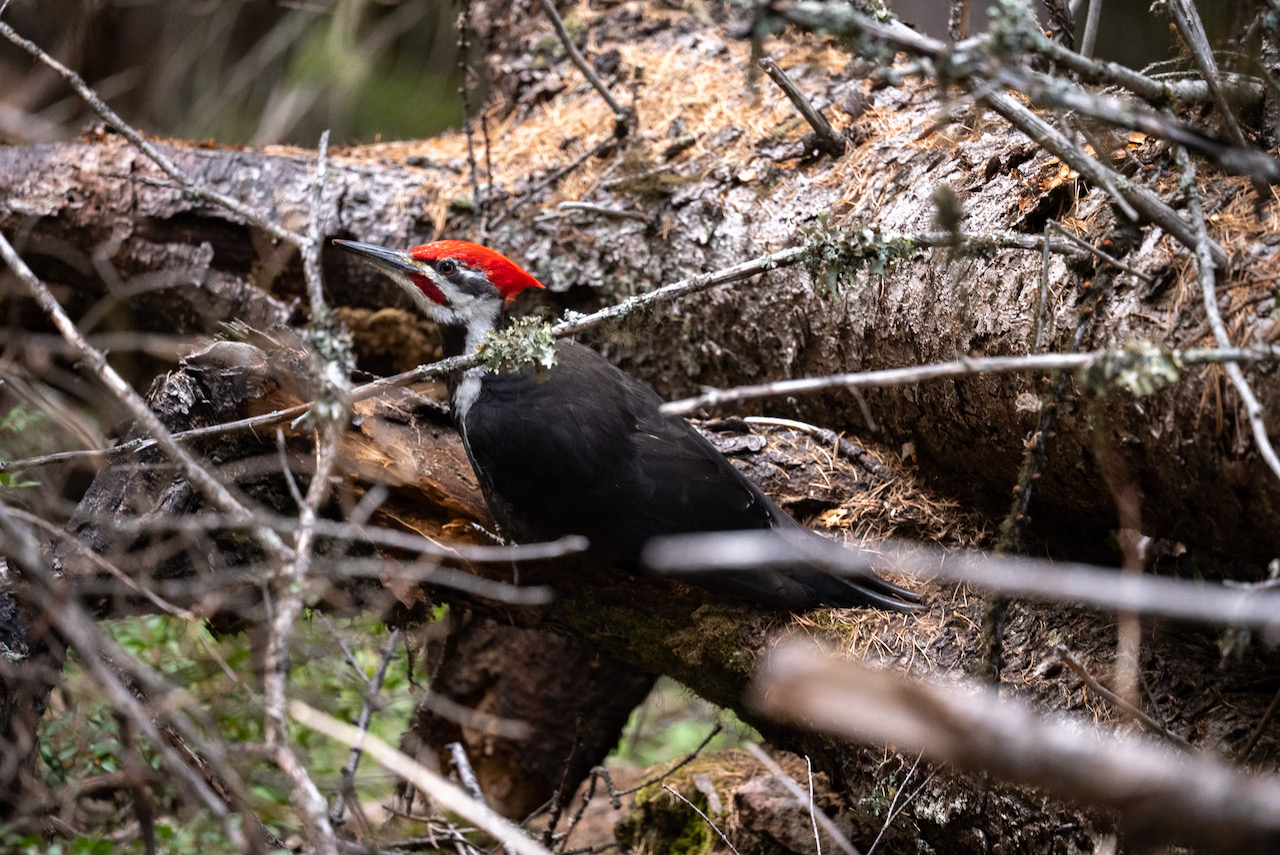 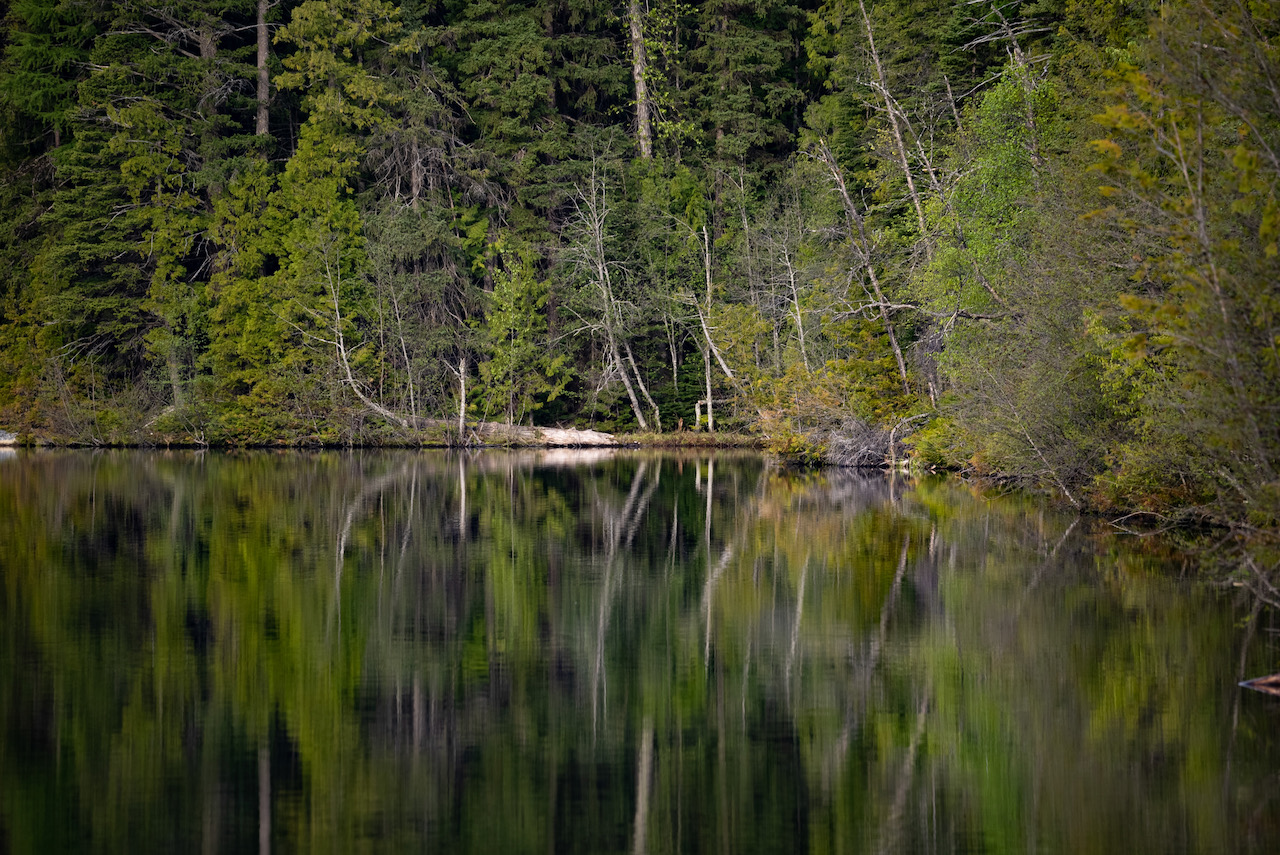 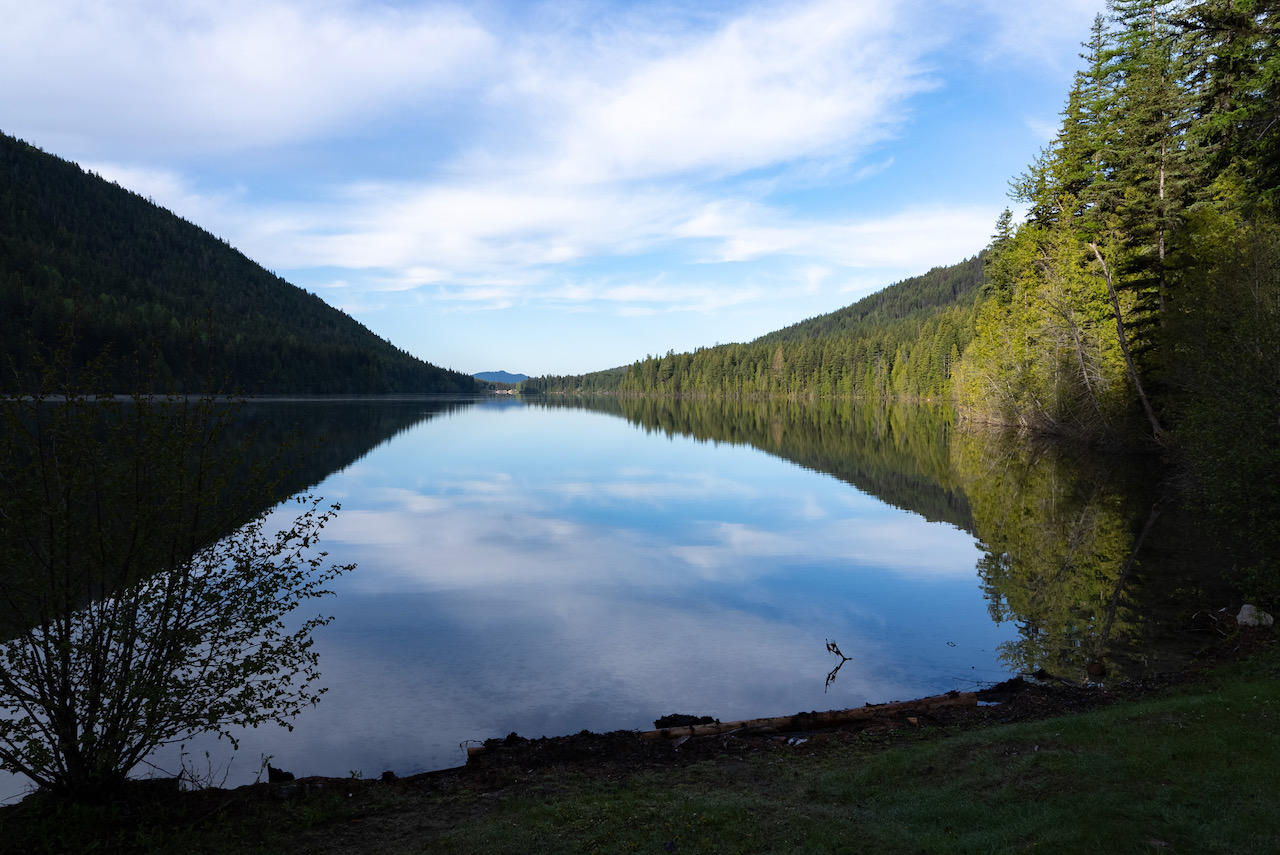 From Jewel Lake we drove forest service roads to Christian Valley and popped out just north of WestBridge. Slightly lost and travelling on progressively worsening roads we slinked out onto the east Kettle River like we knew what we were doing. This whole adventure was accentuated by the oddity of towing the canoe and trailer places they had no business being towed. And that leads to the final chapter of this adventure in which we took the canoe up to Goat Fire Lookout and back into the snow. 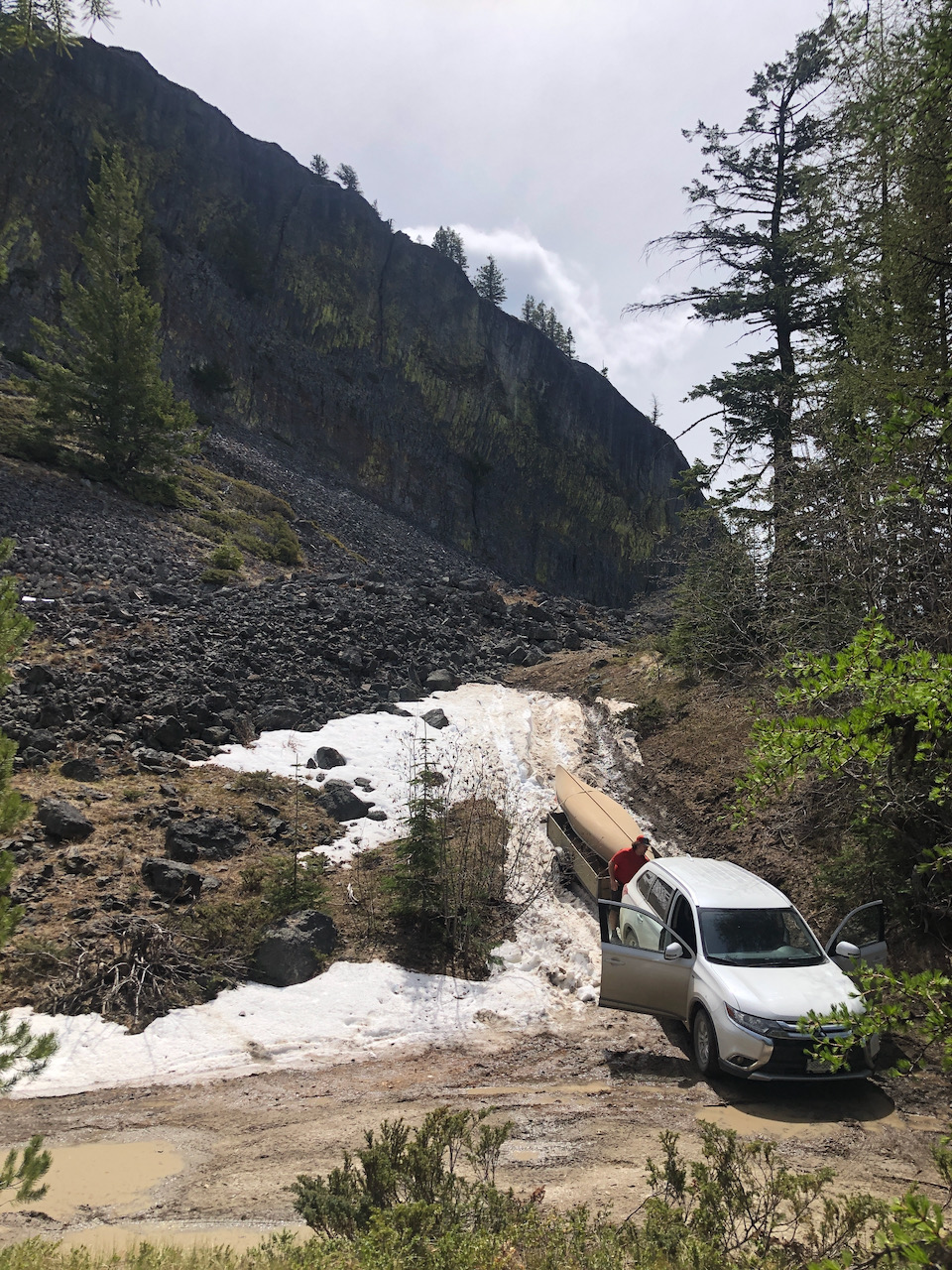 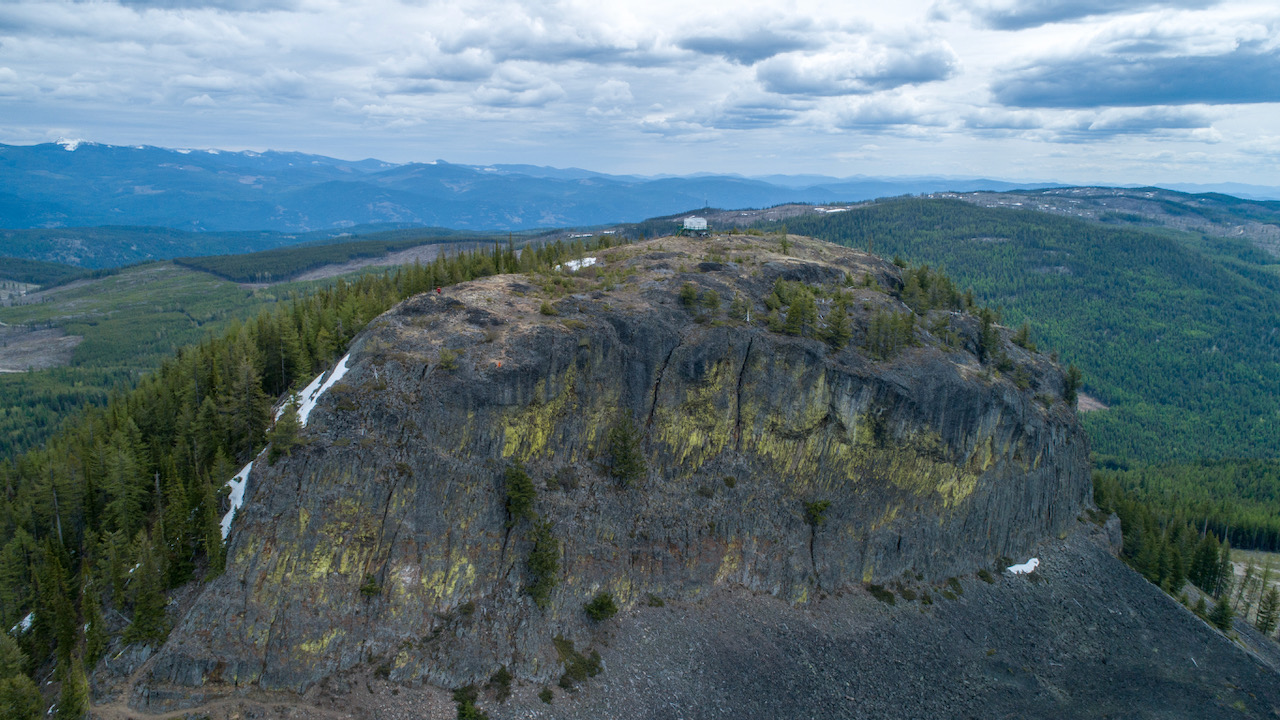 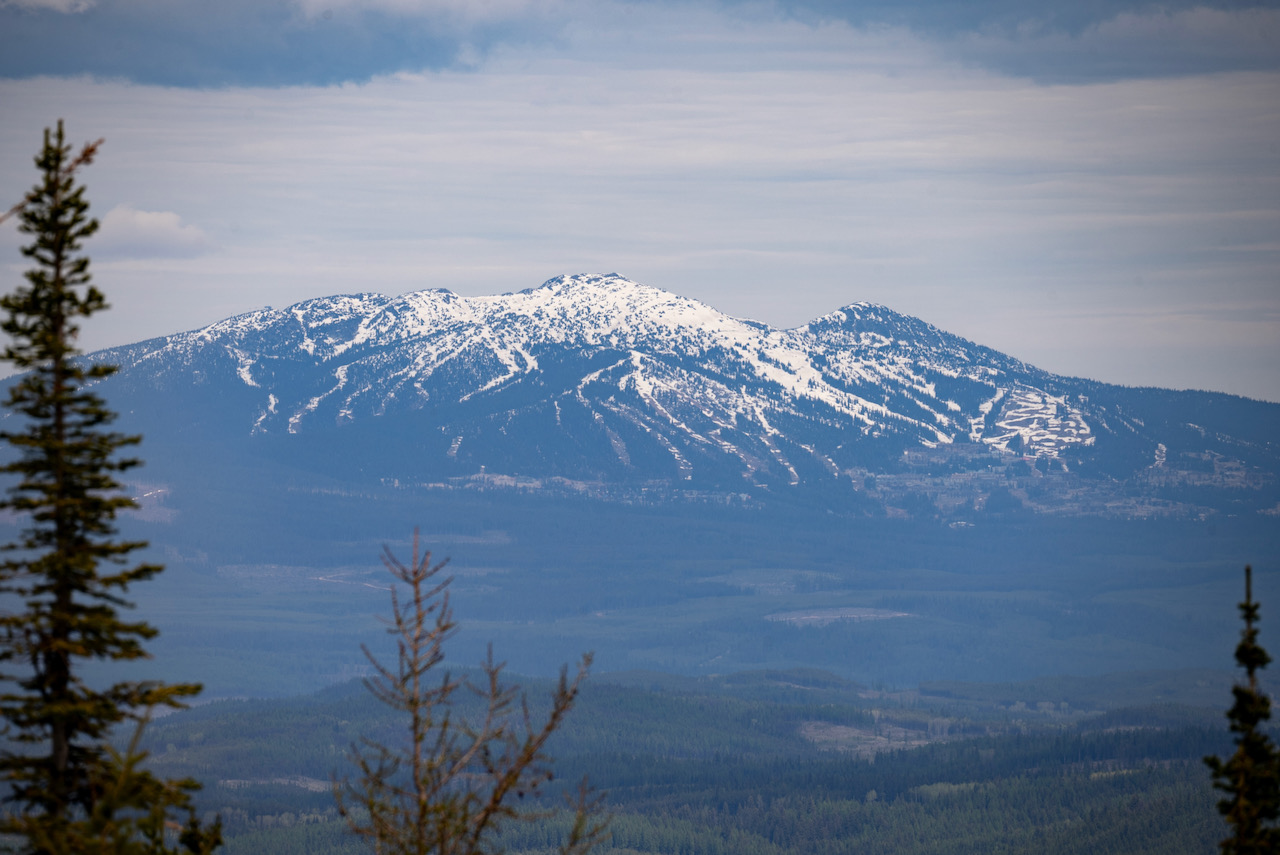 At this point I'm proud to say I had acquired 9 ticks and my travelling companion Martin had only 6 (or maybe 7)! I win. Speaking of Martin... if anyone has made it this far through this endless blog post I may be looking for a new hiking partner. I feel Martins calves are shrinking to the size of a mere mortals which severely diminishes the appeal of spending 72 hours with him. But he does take some awesome photos and is considerate enough to wear bright colours so he stands out in the vids. 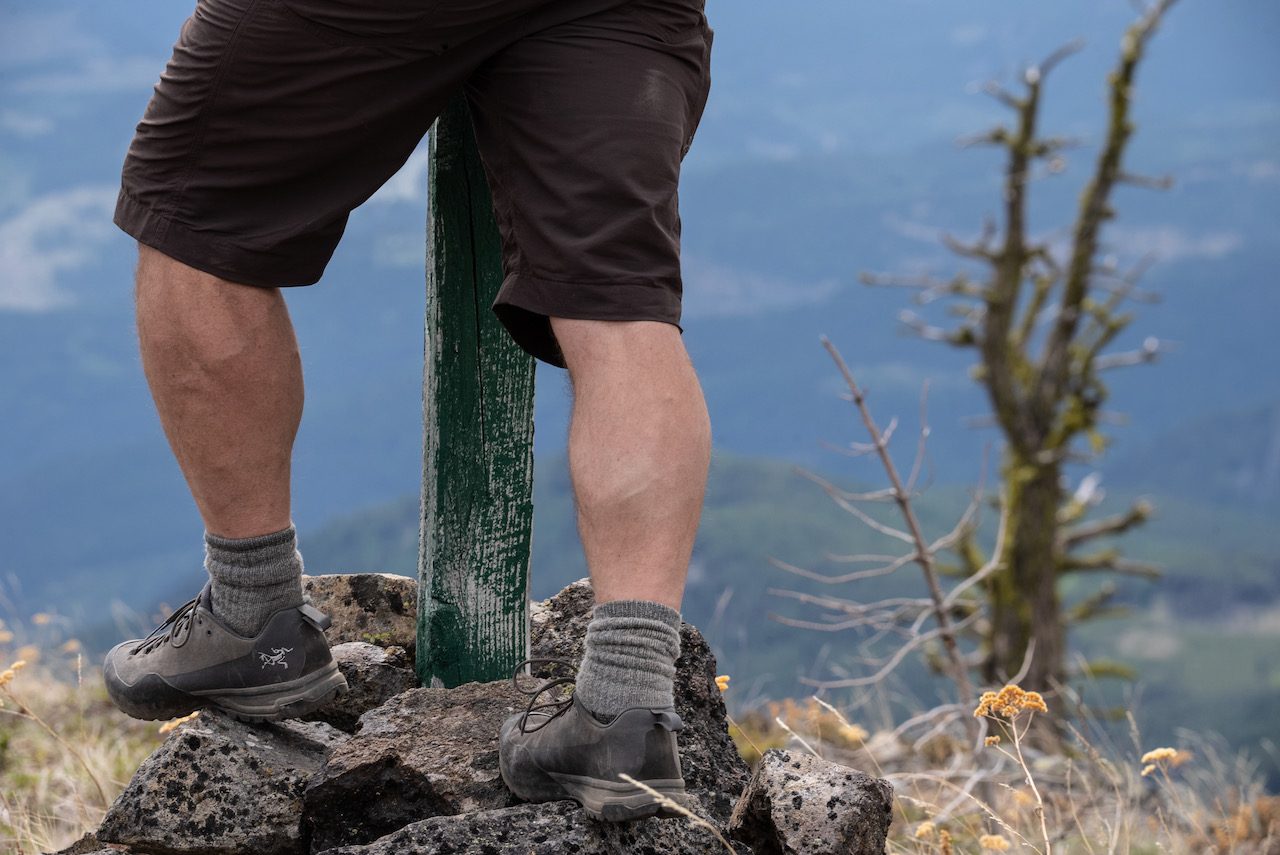 Videos of cute rabbits, a slightly smarter wood pecker, waterfalls and fire lookout with a canoe under it.